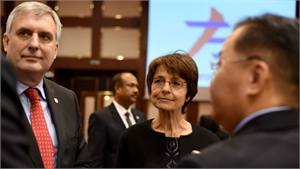 “The competition among the economies cannot be based on poor working conditions and low payment”,  Deputy Prime Minister and Minister of Labour and Social Policy Ivaylo Kalfin firmly stated in interviews for the press after the end of the 5th ASEM Labour and Employment Ministers’ Conference  (ASEM- LEMC), hosted by the Ministry of Labour and Social Policy. The event in Sofia was held in partnership with the European Commission and was attended by the European Commissioner Marianne Thyssen.

“The forum has been a great success as it was attended by representatives of 44 states and several international organizations”, the Deputy Prime Minister said. He stressed that the declaration adopted by the delegates at the end of the two-day forum was an important strategic document aimed to serve as the foundation for future fruitful discussions among the states from Europe and Asia aiming to improve working conditions and social protection for workers at both continents.  The subject of youth unemployment received priority in the course of discussions.  The forum further discussed ways to encourage employment among the young people and expand the opportunities, which the states provide to the young people so as to encourage them to stay in their home country and develop, work and pursue a career there.

European Commissioner for Employment Marianne Thyssen rated the conference highly and defined as “significant” the results attained during the event as outlined in the so-called “Sofia Declaration”. “The most important aspect of this forum has been the opportunity to once again declare partnership among the countries in Europe and Asia as an indication of readiness to introduce common standards for working conditions and social protection,” she said. The European Commissioner further underscored that in order to meet the goals set in the adopted “Sofia Declaration” it was necessary to pull together the joint efforts of both the public authorities and social partners.

“The Declaration outlines different policies that altogether clear a common path ahead which is yet to be followed in cooperation among the separate countries, so that a specific mechanism is thus created to overcome common problems related to employment and social protection. Forums like this one clearly show that despite the scales of globalization in the world that we live in, countries tend to experience quite identical problems and we can seek a solution faster and more efficiently when we join efforts,” Minister Kalfin specified. He underscored that the participants in the working meeting between trade unions and employer organizations of ASEM Member Stateshad reached an agreement for the first time on the need to take action aiming to improve working environment, working conditions and social protection of the workers. “Possibly the most important message from the discussion among the social partners has been that they will have an important say in the policies and measures aimed at the improvement of working conditions and social protection”, the Minister summed up.

The Fifth ASEM Labour and Employment Ministers’ Conference has been the biggest international summit held in Bulgaria in 2015 and the achieved results serve as the basis of  enhanced partnership among the countries on the two continents in the area of employment, the Deputy Prime Ministers  further underscored.